Thai durian has outranked rice and para rubber as Thailand’s top export performer, with export volume last year estimated at about 187 billion baht, compared to 100 billion baht for rice exports and 90 billion baht for rubber, according to the Centre for International Trade Studies at the University of the Thai Chamber of Commerce.

Director of the Centre Assoc. Prof. Dr. Att Pisarnvanich said that, in the next five years, Thailand is likely to retain its position as the world’s leading durian exporter, but its export market share may shrink from 85% to 76%, due to stiff competition from both Vietnam and Malaysia.

He said Thai durian still has good export potential, especially to China, which is the main export market for Thai durian, but it may face increased challenges, such as quality, increased production, labour shortages and price controls imposed by Chinese wholesale buyers in Thailand. 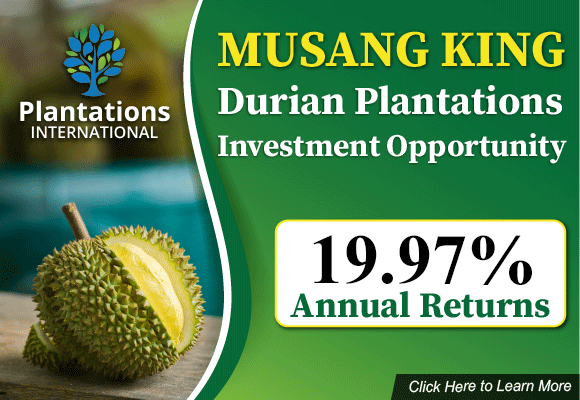 He disclosed that the shipping rate for one cargo container has recently risen from US$2,300 to about US$9,000 and land transport for each container has increased from 80,000 baht to 250,000 baht.

The price of Thai durian sold to China between now and 2026 is likely to increase to about 417 baht/kg for the Mon Thong strains, based on the price at Guangzhou’s Jiangnan fruit and vegetable wholesale market, which is the largest market of its kind in China, if China imports more than 15% of Thailand’s output. Ex-farm prices are likely to increase from 121 baht/kg this year to 149 baht/kg in next five years, according to the UTCC centre.

Due to the attractive price of durian, many farmers in Thailand’s north-eastern provinces have migrated from other crops to durian in the past ten years, with land used for durian cultivation increasing six fold since 2011. About 80% of farmers in Thailand’s eastern region have cleared their land of rubber trees and now grow durian instead, resulting in a fivefold increase in durian output.

According to the Thai Ministry of Agriculture and Agricultural Cooperatives, export of durian to China, from the eastern region alone, between February and June 5th this year, amounted to 433,809 tonnes, compared to 425,000 tonnes for the same period last year.

In Chanthaburi province alone, 91% of this year’s crop has been harvested, of which 87% has been exported.